So you’ve finally found an air purifier that ticks all the right boxes. It has all the filtering capabilities you want, as well as the right level of performance which includes the sufficient air flow rate, CADR and ACH numbers. However there is a catch. All those specs and figures have been measured in ideal conditions and as you know, the performance measured inside a lab is very different to a real life situation.

When you place an air purifier inside a room and put it to work, the performance numbers are going to drop somewhat due to the fact that there are people in the room. The more people there are the more contaminants are created. Also, the air flow measured in ideal conditions doesn’t take into account the placement of obstacles.

Household appliances and furniture disrupt the air flow of an air cleaner, making it less effective. Also, since the room is not hermetically sealed it will exchange air with rooms next to it each time you open the door. So just to help you out, I’ve put together some information below that will help you properly size an air purifier before you buy it.

Where to Place an Air Purifier?

Where to place your new air purifier should be top of the list. Theoretically, the best placement for an air cleaner would be right in the middle. But there is also the principle of diffusion to take into account.

What does this mean? Well, as your air purifier filters, the air particles that are still airborne will begin to spread throughout the room keeping equal distance from each other – the principle of diffusion. But, the vacuum created by the fan will eventually pull them in as they circulate which means that by placing the purifier at one end of the room it will be able to clean the air on the opposite side too.

Room Size and Level of Pollution

Of course, one of the most important factors you need to consider when buying an air purifier is the size of the room where it will be used. Now, it is a given that you need to get an air purifier which is able to filter the air several times within the course of a single hour. When you first install the purifier, the room pollution will be at its highest. Your goal is to have the cleaner cut down this level of pollution by as much as 80%. After that, it will require a lot less air changes in order to keep the air clean and crisp.

When sizing an air purifier you also have to take into account the constant sources of pollution which can come from pets, cooking smells, dust and a whole host of other things. For an air purifier to be effective, you should really aim for 2 to 8 air changes per hour. The heavier and more consistent the pollution, the more changes you’re going to need. 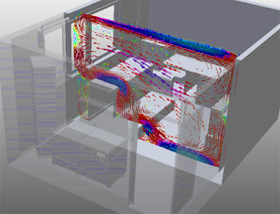 The structure and shape of a room is also important. If your room has stuff such as arches, pillars or a bar these will change the projected air flow pattern of the purifier, and therefore alter the numbers in the specs. Make sure to place the air purifier in a spot where it won’t be blocked by anything otherwise it won’t perform as well as it should.

Factor in the Noise

If you want to filter the air inside your bedroom for instance, you will have to think about how much noise it makes. One mistake people make is to buy a purifier that has a smaller capacity because the space you need to “clean” isn’t that large. If you were to have an air purifier which is suitable for cleaning 600 to 800 square foot rooms clean the air inside a 200 square foot room, it will do its job equally as well.

The benefit of a larger capacity air filter is that it achieves the same level of air cleanliness while producing much less noise due to the filters being larger. This means you can keep it set to low or medium speeds which not only helps the noise factor, but saves on energy.

The bottom line is: unless it’s an issue of space, always go with a larger air purifier. These are able to battle pollution more efficiently, and will make less noise in the process. But, in cases where a single large air purifier really won’t do, try going with several smaller units instead.